Écija’s gastronomy is based on products coming from its fertile lands. There is a great variety of recipes such as “espinacas labradas” (spinachs made with olive oil, fried bread, garlic, cumin, pepper, vinegar and salt), “salmorejo” (purée consisting of tomato and bread, made with tomatoes, bread, oil and garlic), “gazpacho” (refreshing and cool soup made of raw vegetables with bread, olive oil, garlic and a bit of vinegar) or “flamenquín”. We should also point out the “mollete ecijano”, regarded by experts as the best one due to its texture and flavour, which along with “manteca colorá” form the traditional breakfast of the city. Écija also offers a great variety of pastries, among which we can mention “tortas de manteca” (type of bread made of wheat _our, pork lard, leavening, salt and sesame, also eaten for breakfast), “tortas de aceite” (light, crisp and flaky sweet biscuit in the shape of a torta made of wheat flour, olive oil, almonds and sugar among other ingredients), “Yemas el Ecijano” or the delicious “bizcochos marroquíes” made by the nuns of the Convent of Santa Florentina.

SOPA DE GATO
It derives from “sopa de ajo”, but it also contains tomatoes and green peppers. Once it is done, slices of bread are lightly fried and clear soup or warm water is added. When the liquid is almost consumed, the eggs are poached. Asparagus or clams can also be added.

ESPINACAS LABRADAS
Once the spinachs have been boiled and contain no liquid, they are mashed together with raw garlic, cumin, vinegar and salt. Apart from this, a bit of garlic and pieces of bread are cooked to decorate the dish. After this, sweet pepper is added to the frying oil and it is mixed with the spinachs. It is served cold.

CAZUELA DE ESPARRAGOS TRIGUEROS
Garlic and sweet pepper are fried together. Then, asparagus are lightly fried and a mixture of cumin, fried bread, salt and vinegar is added. After this, the asparagus are covered in water and the eggs are poached.

FLAMENQUÍN
It is roll filled with pork fillets accompanied with small pieces of ham, boiled egg and bell pepper. After the roll is prepared, the egg and breadcrums are breaded, everything is fried over high heat in the frying-pan and it is served together with salad

GAZPACHO ECIJANO
The crumbs of a small piece of bread are left to soak and after straining it, we put them in the mixer together with cloves of garlic, a spoonful of salt, vinegar and 125ml of olive oil. You also have to peel three tomatoes and have a small pepper and some slices of cucumber. After this, everything is grinded well, one litre and a half of water is added and it is put into the fridge.

RABO DE TORO
One onion and four cloves of garlic are fried and then a couple of oxtail pieces per person are added into a sauce pan. After this, a chilli pepper and “pimiento de corneta” (type of pepper) are mashed. A spoon ful of sweet pepper and half glass of wine are added and it is left to boil until everything becomes tender and the clear soup has turned into a sauce. It is fried with chips.

MOLLETE
Typical and traditional product of Ecijan breakfast. It is a sort of toasted bread in which anything can be spread, normally olive oil or “manteca colorá”.

MANTECA COLORÁ
raditional product elaborated from thepork offal and its lard. It is made of garlic, oregano, white pepper and paprika.

TORTA DE MANTECA
Sort of tart made of pork lard and sesame. It is served toasted and you can eat iteither alone or together with marmalade or butter.

Wash the tomatoes, cut them up and put them in the mixer together with soaked bread (without water) and the garlics. Beat all together well and add vinegar, salt and oil. Keep beating until everything has turned smooth. It is served cold with a garnish of finely-chopped ham and boiled egg 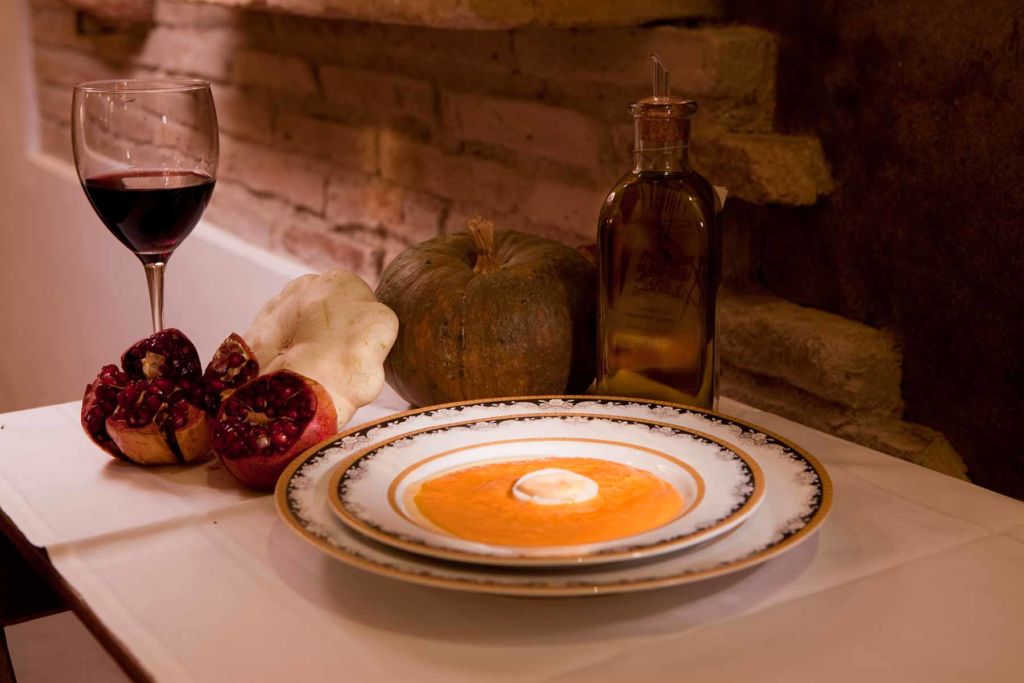 “Yemas El Ecijano” are traditional home-made products elaborated with egg yolks and sugar. Its original (and secret) recipe has been improved over the years.
Location and contact: Cintería Street, 4 – Tlf.: 954 830 076.

This website uses cookies to improve your experience while you navigate through the website. Out of these, the cookies that are categorized as necessary are stored on your browser as they are essential for the working of basic functionalities of the website. We also use third-party cookies that help us analyze and understand how you use this website. These cookies will be stored in your browser only with your consent. You also have the option to opt-out of these cookies. But opting out of some of these cookies may affect your browsing experience.
SAVE & ACCEPT